This message was sent

Thank you for your interest. We’ll be in contact with you ASAP

React Native vs Swift: Which One to Choose in 2022 for an iOS Mobile Development?

Mobile application development is a growing industry. According to Statista, out of 7.7 billion people, the smartphone users will account for more than 6.5 billion in 2022. Online banking, shopping, learning and gaming are all available in a mobile version and matched to different devices and operating systems. Businesses need to be available from a mobile phone. But when developing for either Android or iOS devices, one of the first things you will have to consider is which programming language to use. Today we will do a React Native vs Swift comparison, and learn, how React Native and Swift performance can decide your project's destiny.

Both React Native and Swift are less than a decade old, making them trending technologies in demand.

Swift is a relatively young programming language, whereas React Native is a JavaScript framework. React Native

So, what should you consider when deciding between React Native and Swift? And which is the right option for you in 2022?

It depends on various factors, including your budget, team size, application type, and more. We'll cover everything you need to know about choosing between React Native and Swift here.

Swift is a multi-paradigm programming language launched by Apple for iOS devices. Developers can also use it to create apps that run on other Apple devices like the Mac and Apple Watch.

It was introduced in June 2014 to replace the more complicated Objective-C. It’s flexible, simple, and concise and has become very popular with iOS app developers in recent years.

Some major apps on iOS that use Swift include Slack, Asana, and LinkedIn.

React Native is a framework that can be used to build applications for both iOS and Android devices. It was launched with the backing of Facebook in 2015.

It’s based on JavaScript, and most of the code can be shared between platforms, primarily iOS and Android. It’s used for cross-platform apps and can significantly reduce software development time if you create a mobile app for both platforms.

JavaScript is a long-established and widely-used programming language. As such, React Native became popular with many developers, and many major apps use it, including Bloomberg, and Walmart.

It's helpful to know the advantages and disadvantages of Swift vs React Native before starting a mobile development project.

Pros and Cons of React Native

React Native vs Swift: How Do They Compare?

The pros and cons are useful when comparing Swift to React Native. But how do the two mobile development technologies stack up? Here we look at how the apps developed on each platform compete in terms of a user interface, performance, stability, and other features.

It is important to consider the user interface when developing an application since it makes a significant difference to the users, who nowadays are spoiled and judge the app withing the 5 first seconds .

While React Native offers a platform very similar to native apps, it cannot compare to Swift for iOS apps. Swift is, therefore, the language of choice for native iOS apps in terms of the UI.

Regarding React Native vs Swift performance, Swift is the better option for iOS apps. Native development generally provides better performance, which is certainly noticeable for dynamic apps and apps that use a lot of graphic effects like games.

Swift apps perform better in most situations, even if they consume more CPU power.

While React Native may perform better at optimizing CPU usage in some circumstances, it is less effective at optimizing graphics.

Swift offers better stability in general. This is usually the case when you use a native development language that takes full advantage of the device's features.

If you are creating solely an iOS app, Swift is a better choice for speed. But the choice is less obvious when you want to create both an iOS and Android app.

If you want an Android and an iOS app, it's faster to do all the work in React Native for both apps rather than separately.

We'll look more at cost later, but Swift developers tend to charge more than JavaScript developers. There's not a great deal of difference in the US. However, if you hire developers in Eastern Europe, you can save a lot when hiring React Native programmers.

The React Native development cycle is also shorter when you are developing two applications instead of one, which can help to reduce costs further.

While Swift is a language, React Native is a framework, making comparisons difficult, but it is fair to say that React Native has a larger community.

This is one of the reasons why hiring a React Native programmer is often cheaper. Because there are more of them, it comes down to supply and demand.

As the most popular programming language, JavaScript is readily accessible worldwide, allowing you to draw on a larger talent pool.

There are additional factors to consider when comparing the two programming options.

Documentation is excellent for both. Apple and Facebook developed Swift and React Native respectively, so both projects are well-organized and well-documented.

Because JavaScript is the most popular programming language and is used on the vast majority of websites, the community is more extensive. So React Native is better in this regard.

Swift vs React Native: When Should You Use Each?

The short answer is that you will probably want to use Swift for iOS apps and React Native if you create both an iOS and Android version of your app.

That's a simplified answer, however, and there is a lot more to it than that.

Swift is typically the best choice for iOS apps that require the most advanced UI and fully use all the device's features. If you are creating a native iOS app that you plan to extend to Macs, Apple Watches, iPads, and Apple TVs, Swift is the obvious choice.

But you may want to use React Native too. For example, perhaps you want to create a prototype, and React Native can be quicker and simpler if you already have a team of developers who know JavaScript.

React Native is the obvious choice when deploying to Android and iOS. If you don't need your app to access the camera and other hardware and you are creating a simple app, React Native is fine for both platforms.

With React Native, you can develop apps for both platforms with a single team. As such, you won't have to hire native developers in two separate languages, which can help you lower expenditures.

With React Native, you can hire cheaper developers in Eastern Europe.

The cost depends on the project duration, app complexity, and whether you are hiring an outsourced team or using an in-house team of developers.

The hourly rate in the United States for both Swift and React Native is between $70 and $100 per hour. You can expect to pay a slightly higher hourly rate for Swift developers.

In Eastern Europe, Swift developers charge between $40 and $65 per hour. React Native developers, on the other hand, charge as low as $30 - $60 per hour. Savings can be significant with this difference.

This guide covers the key differences between Swift and React Native, looking at the pros and cons of each, how they compare, and providing insight into which is the best option for you.

But there is no right or wrong option when choosing between them, and both are excellent options for developing mobile apps.

When choosing the right option for your app, consider your budget, timeframe, the platform you are developing for, and the size of your team. You may already have developers who know JavaScript, which could sway your decision, as can your personal preference.

The type of app you are creating is also relevant. For example, if you are working on a dynamic performance app with lots of graphical effects for iOS, Swift is often a better choice.

Make sure you consider all the factors, then choose the most suitable option according to your circumstances.

And keep in mind: getting obsessed with a particular technology won't help you outperform the competition - you just need to cherry-pick the most effective bits and create a solution that has a competitive advantage.

If you are wondering if React Native or Swift is the better choice for your project, maybe just reach out so we can find out together. Maybe you should also consider Flutter and Kotlin?

We are glad you’re interested in QIT! We'll let you know when appearing something

Why Use Staff Augmentation for Your Development Project?

3 Hacks to Win Over Your Competitors with IT Outstaffing

Get the latest updates, insights, news, and checklists on building dev teams right into your inbox.

You will receive firsthand our updates and industry insights.

Leave your contact details and we’ll get back to you. 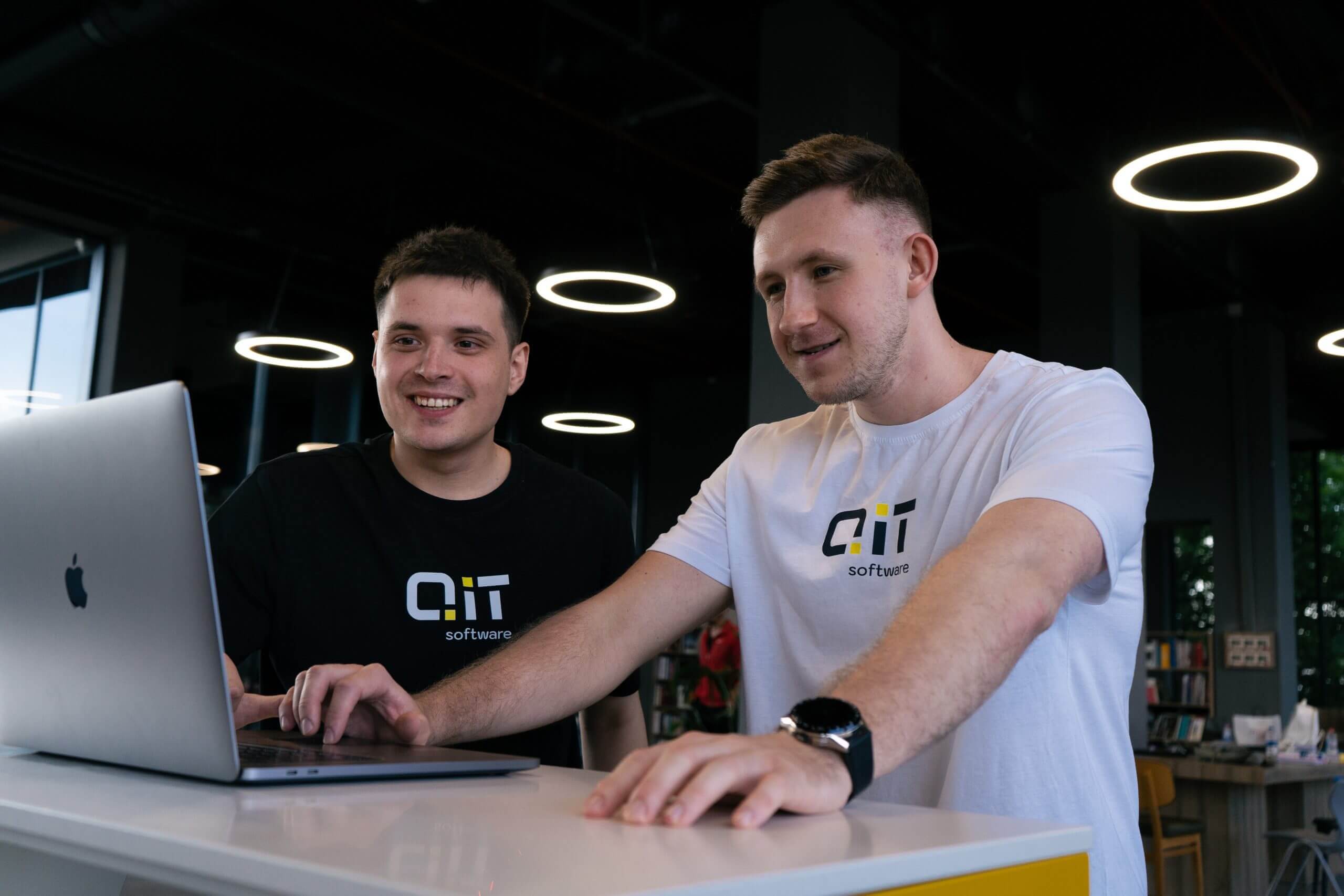 This message was sent

Thank you for your interest. We’ll be in contact with you ASAP